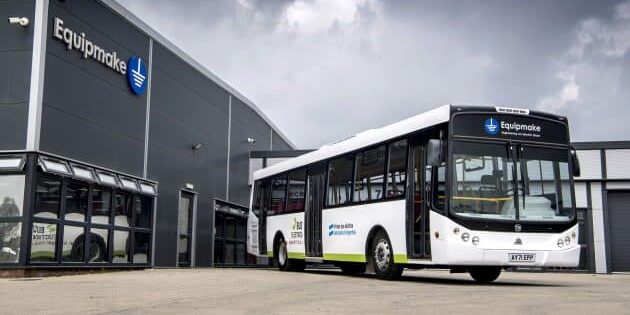 Equipmake has dispatched a single-deck battery-electric bus with its modular driveline to Buenos Aires. It follows the completion of testing of the Agrale MT17.0LE vehicle in the UK and will see the commencement of in-service trials in the Argentine capital.

Within the bus is the same Equipmake drivetrain that the OEM will use in the Jewel E double-decker for the UK. That powertrain can also be used on a repower basis in existing buses, as debuted in a Volvo B5LH earlier in 2022.

Equipmake has worked with Brazilian bus manufacturer Agrale and Argentinian bodybuilder Todo Bus on the bus for Argentina. It has been developed as part of an Advanced Propulsion Centre (APC)-funded cost effective low entry Bus project. The Snetterton firm led its two partners on the work over three years with an objective to deliver a cost-effective battery-electric bus to suit South American conditions.

318kW/h of energy storage is included in the MT17.0LE via lithium-ion batteries to deliver an estimated range of 150 miles. Equipmake’s HTM 3500 motor is used. Thousands of miles in and around Norfolk and on proving grounds have been completed as part of the UK testing phase. The ultimate objective is for mass production to begin in Buenos Aires by Agrale and Todo Bus using licenced Equipmake technology.

Says Equipmake Managing Director Ian Foley: “I am delighted that, following the completion of final testing here in Norfolk, the Agrale MT17.0LE now begins its journey to Buenos Aires for in service trials.

“Throughout this innovative APC-funded project, we have worked closely with Agrale and Todo Bus along with other key partners. The result is a state-of-the-art yet cost-effective bus.

“We are now looking forward to the start of the trial. The potential for this new vehicle is huge. Buenos Aires has around 16,000 buses on its streets – roughly twice the size of London’s fleet.

“There is no doubt that electric buses can play a significant role in helping Argentina’s capital hit its 2050 net zero objective.”

Equipmake adds that its Jewel E demonstrator, which is bodied by Beulas, will now begin in-service trials with Go-Ahead London “in the coming months.”